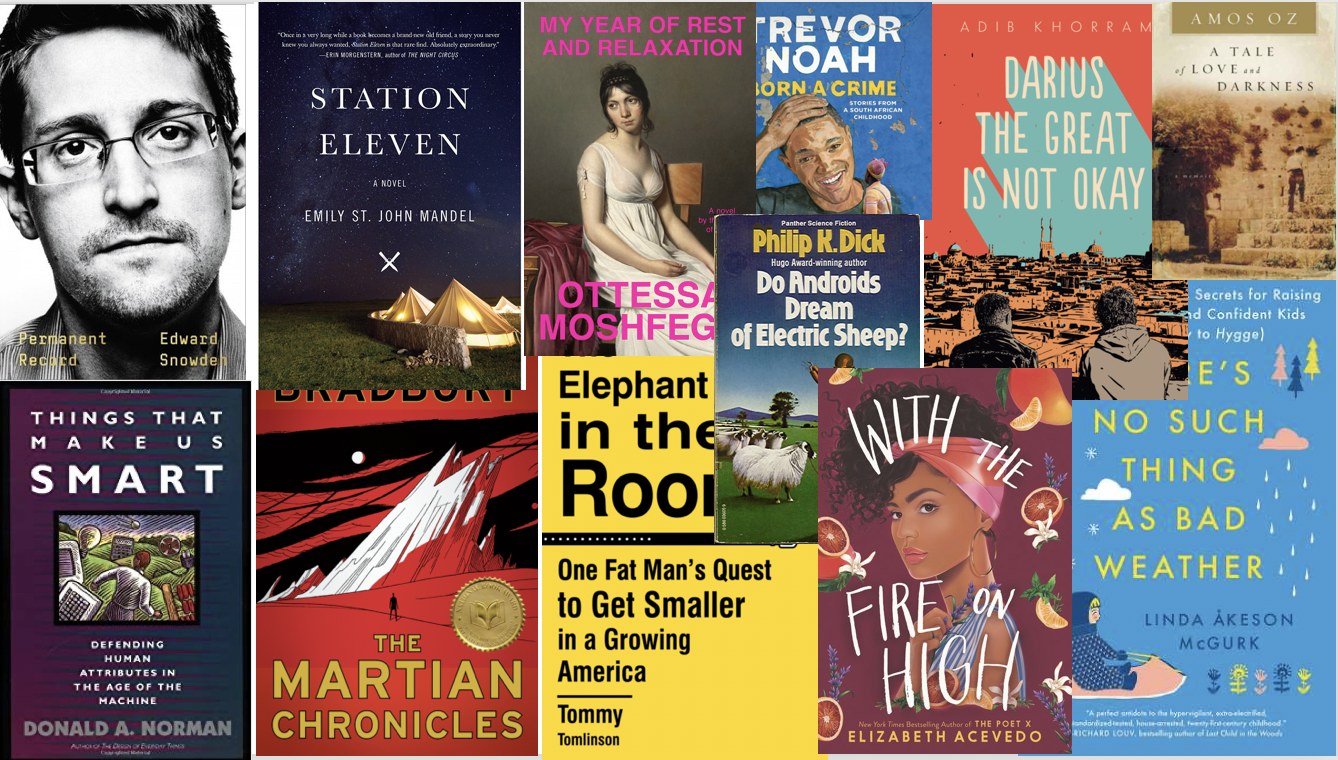 This year, I knew I wouldn’t have a lot of time. The first half of the year, my pregnancy took a lot of time away from me in the form of body-numbing exhaustion. After working and taking care of my daughter all day, I simply collapsed into bed and fell asleep at 7 at night.

In the second half of the year, my baby was born, thus taking away all of the other time I had.

But in between those moments, I read like crazy. I squeezed in reading whenever I could. Lying in the darkness in bed near my phone. Listening to books in the car. Putting aside the laptop after work and reading. Laying sprawled out in my pregnancy pillow. Feeding the baby at 3 in the morning.

As a result, I read 106 books this year. I usually don’t recommend reading volume, instead going for quality, but what I’ve found is that the more I read, the more good books I find, and that only about 10-20% of the books I read in any given year are any good.

So, without further ado, here’s what I read this year and what I loved. Full reading challenge list here.

Snowden is, in my mind, one of the most important thinkers about Modern Internet Things. He’s lived and understood what the architecture of the modern internet really means through painful experience. I’ve written before that his revelations have changed how I see the internet.

There is a lot to love about this book, including the revelations themselves, but mostly, the beauty of this book is learning about Snowden as a human being, his thoughts, beliefs, and formative experiences growing up, as well as his opinions on where we need to go, now that we’ve royally messed it all up. What I was impressed about most was the depth of his conviction in the fact that the internet ultimately can be used for good, if we let it.

I could not put this book down through the parts where he described how he got the data out of the NSA facility in Hawaii.

There is this whole genre of book that is on the rise after Bringing Up Bebe (which I also loved!) that details how different cultures do parenting, and I’m all about it, as long as you take them with a grain of salt.

McGurk grew up in Sweden, where kids play outside all the time, regardless of weather, and she wonders why that’s not the case in the United States, and how we can make it so. A lot of the concerns she outlines are things I think about all the time - how most American spaces aren’t walkable, how kids don’t go outside to play in the snow, how illness is perceived, and so on.

Of course, we can’t make America like Sweden, because it’s not Sweden. But there are a lot of good ideas we can take away, and that’s really all we can ask for from a book.

The Elephant in the Room by Tommy Tomlison

This was an extremely touching and realistic read about a man’s struggle to lose weight. To be clear, there are a LOT of weight loss books. A Lot. And the loser ends up being a Crossfit champion who runs marathons and eats healthy every day.

This book is not that. This is about a continuing struggle against both the author’s personal psychology of associating comfort with food, as well as pushing back on the enormous culture that tells us we need to be eating all the time, as well. Tomlison is an extremely skilled journalist who doesn’t elicit sympathy for the sake of sympathy - he is actively trying to change something here, and examines current America in the process.

I’m not huge on YA in general because I feel like a lot of it is now just political for the sake of being political instead of actually telling a good YA story and, as a side effect, it takes a critical look at our culture, but these two books really hit the spot.

Both are, as YA usually is about outcasts. But they’re very different outcasts. Darius is half-Persian (Iranian) and gets made fun of for being Persian in America and American in Iran when his family has to go for an unexpected trip. He has a hard time dealing with his dad, and also with his own depression. In spite of what I just described, the book itself is not depressing, it’s full of humor and cultural observations and all sorts of good family stuff that teenagers usually deal with.

With the Fire On High is about Emoni, who had a teen pregnancy and is now trying to finish school on her own terms while living with her grandma in (my fair city!) Philadelphia. Emoni wants to be a chef, and the book is about her growing up and out of her problems while taking care of her daughter and learning how to be an adult. It’s full of spirit and -yep - heat.

Born a Crime by Trevor Noah

Honestly, based on all the clips I’ve seen of the new Daily Show, I haven’t been impressed with Trevor Noah as a host, so I’ve been avoiding this book because I thought it would be shallow and self-serving. I couldn’t have been more wrong. This book blew me away with nuance, heart, and an examination into a life that couldn’t be more honest and up-front with the reader. A strong recommend and candidate for discussion.

Things that Make us Smart by Donald Norman

This book was written in 1993, and it’s still 100% relevant today. Norman talks about what computers should do, and what people should do, and I have so many pages highlighted in quotes. I strongly believe that this (and every other book Norman wrote) should be required reading for anyone who gets paid to work with computers all day.

The Martian Chronicles by Ray Bradbury

I’m kind of a hesitant Bradbury fan in general, because his work is really good, but really morose, and this is no exception. We’re dropped in the middle of a hypothetical trip to Mars, when humans finally figure out how to get to the Red Planet, and over the next 100 years or so of human trips to Mars, their impact on the local ecosystem, what it means for humans to travel, and so on. This book is weird, weird fiction, and it shouldn’t be taken as individual stories, but it’s excellent to look back on as a whole and reflect what it means for people to go to space, resources, privacy, and all of the stuff we’re thinking about now.

This is knock-out, immersive, good fiction, the way fiction is meant to be written. I was drawn in immediately and the book didn’t let me go for several weeks afterwards. We all know post-apocalyptic fiction. The zombie virus comes for everyone and the few survive. But this tackles an issue rarely seen in that genre: how fragile the chains creating modern society are, and what it means for them to be destroyed, and how we live with the memory of that society, and start to recreate it. If you read one fiction thing this year, this is it.

A Tale of Love and Darkness by Amos Oz

Amos Oz is a must-read if you’re at all into international literature and examinations of the human condition. I have been to Israel many times in my life, speak Hebrew, and have read a lot of about Zionism, Israeli history, and the first aliyot. I’m embarrassed to say that I have never read Oz until now (with the exception of small fragments of The Hill of Evil Counsel in Hebrew class), and I’ve come away from this beautiful, lyrical (extremely long and at times very hard to get through, at times hard to put down) book convinced that you cannot have a conversation about Israel without having read it. I can tell that the book has lost something in translation, but not enough for me to not give it 5 stars.

This book is the history of both Amos Oz, a lot of about his early childhood, and then, later, obliquely, his time at Kibbutz Hulda and in the adult world, and about the complicated family relationships of his family of first-generation immigrants from Eastern Europe to Israel. Everything he describes, though, is not cliche. Second, it’s the portrait of a country growing up and going through the same growing pains, the same Love and Darkness that he did. He paints a very complete picture of life in Jerusalem in the 1940s, and in Israel’s early years in the 1950s, and fully draws you into his world of intellectuals and common people, and his pleasures and sorrows.

This is the kind of thing a real book should do.

My Year of Relaxation by Ottessa Mosfegh

I wrote a lot more about it in this post, but basically this book takes the idea of, what if you were privileged enough to completely turn off the world? What would you do? and plays with it. You’d think a book about a self-absorbed college graduate in New York sleeping the day away would be boring, but it is assuredly not.

Do Androids Dream of Electric Sheep by Philip K Dick

Philip K Dick was new to me this year and it was an amazing discovery. He has a lot of good works but I think this is his best that I’ve read so far. Gets into the implications of AI, man versus machine, and what it means to be human. You know, all the good literary stuff.