Kaddish (This is going to be a morose one. Can you tell?)

Last week, the day after Mr. B and I danced to Tantsui Rossiya i Plach’ Evropa, a Umenya Samaya, Samaya, Samaya Krasivaya Popa (Russia, Dance and Europe, Cry, but I have the most attractive butt) and drank champagne to celebrate a birthday, we were in a cemetery to mark two years since Dan’s grandma had died, and I thought about something that often comes to mind-women and Judaism, and the thin line between life and death. 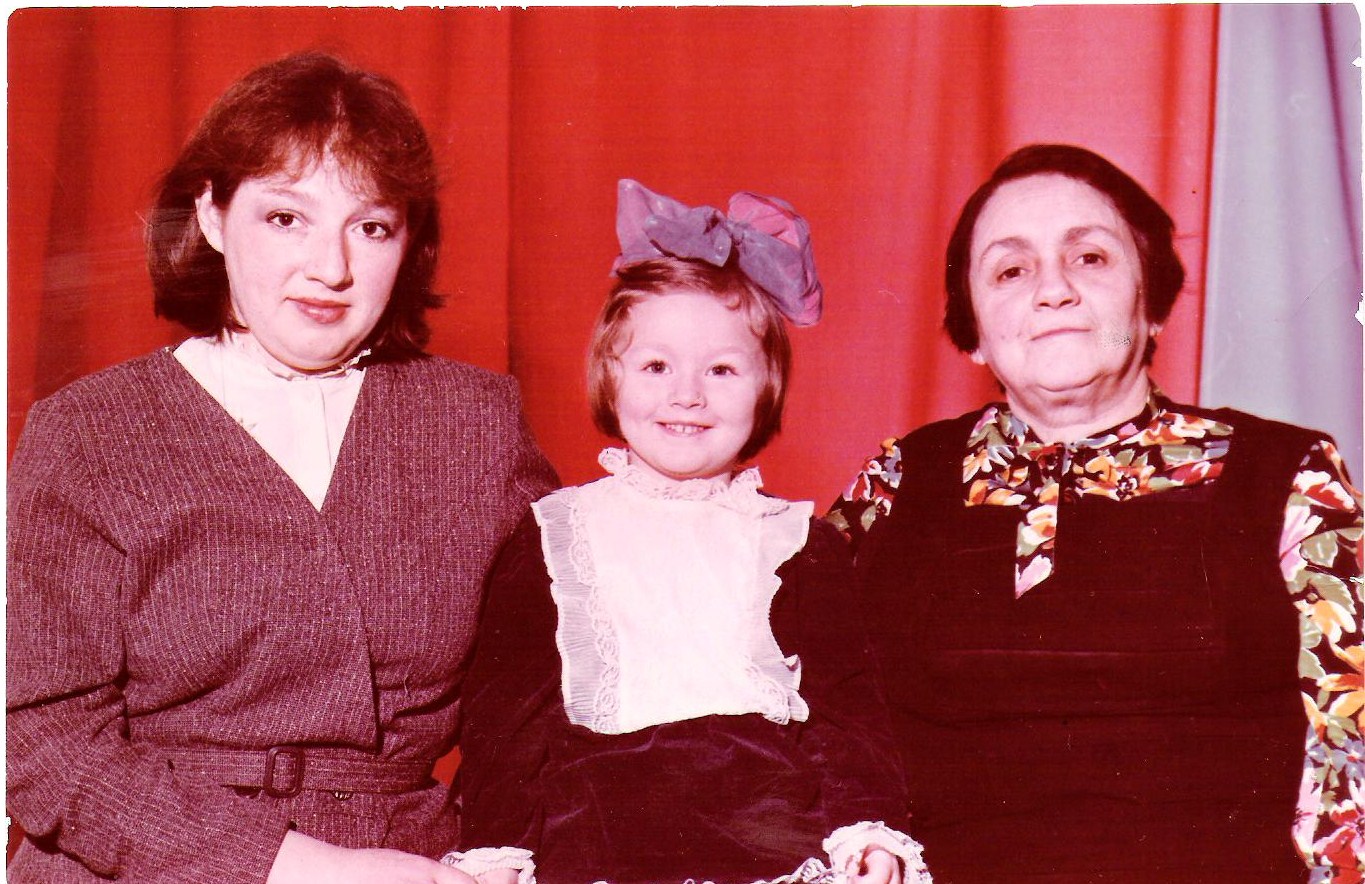 In this cemetery are  all my family who have died in America, including my grandmother, my mom’s mom, who died when I was eight years old. She died of breast cancer that Russian doctors did not want to catch in time and American doctors couldn’t treat. The night before she died, I had a dream that I was sitting in a cemetery and she was being carried in on a white sheet. This episode convinced me that I had killed her and made me jumpy and nervous for the next several months.

Although I don’t miss her often because the memories I have of her are so distant, I do wonder from time to time what she would think of me now and think about the strawberries in her garden.  Two of the most vivid memories I have of her are her showing me different strawberries. The smaller ones were called lampochka-a little lightbulb-because it was shaped like one, and bigger ones that were like two strawberries combined were called a chemodanchik-a little suitcase. The other memory is from America, when, somehow she got a globe for me.  I was six. She asked me if I could find Israel on the map. I had no idea what Israel was, I only knew that there were very strong feelings associated with it.  She pointed to Jerusalem with her pinky finger and said, “Look, look how small it is compared to the other countries around it.  Poor little country.”

My mom dutifully goes to her grave every time she’s in Philadelphia after visiting all of our living relatives. Her persistence to come to the cemetery, quietly clean the grave of dead flowers or leaves has been imprinted on me, perhaps because it’s the only time I’ve seen my mom cry or be anything but happy, energetic, and loudmouthed.

And so, last weekend I went to stand by her grave for a couple minutes before everyone gathered at Mr. B’s grandmother’s grave for the remembrance. I didn’t feel sad, only reflective.  What did my grandmother, with the Star of David and menorah put perfunctorily on her tombstone by rabbis who told my family that that’s the way it’s done, and the name Sarra etched silently into the granite, think about Judaism? What would she have done at my wedding? What advice would she have for me today? Would she and my grandpa still speak Yiddish to each other?

I cleared out the fallen October leaves intermingled with the forbidden-to-Jewish-law fake flowers without any answers and walked over to Mr. B’s grandma’s grave. His uncle slid a prayer book in my hand. “Will you say kaddish?”  “Me,” I asked nervously.  “You’re the only Hebrew speaker out of our whole family,” he replied.

Panic gripped me.  I’d said kaddish numerous times in the numerous ways it pops up in Shabbat prayers and I’d read whole books in Hebrew (Hasamba!), but for that moment, I couldn’t read the Hebrew and I couldn’t even read the Russian transliteration, even though I didn’t need to read to know that yitgadal yitkadash shmei raba.

I flipped frantically through the pages as the whole family looked expectantly on, and started reading an English transliteration in a Hebrew accent.  It was one of the most nervewracking and bizzarre moments of my life, even though I had been learning Hebrew just for moments like this. I read quickly and seriously and didn’t make the right intonations and when I was done I turned red because I knew I hadn’t done it justice.

But no one noticed and as we all stood looking at the tombstone, I felt the melancholy I hadn’t felt at my grandma’s grave, because I’d met Mr. B’s grandma before she died (also of cancer) when Mr. B and I were still dating and then engaged,  and she approved of me and we understood each other in a way that not many people understand each other because we have the same exact personality.

Maybe if I’d been born in the 30s in the Soviet Union, I would have pushed up aggressively through the ranks to be an unheard-of Jewish doctor in Moscow, too, like she was. She was a person who always wanted more from life, both as a woman and as a professional, wanted to be challenged, wouldn’t take shit from anybody, and she married Mr. B’s grandpa for the same reason I married Mr. B-because he is a kind person, but a quiet person who shoulders life’s problems with dignity and strength instead of bitchy blog posts.  Although, I wonder.

If the women of our grandparents’ generation had blogs, what would they write? As far as I know, none of our grandmothers had diaries, because life was too hard and busy for introspection, as was the case for my non-Jewish grandmother, who had to raise two kids almost by herself and worked in a factory that contributed to her illnesses later in life. The women of our grandparents’ generation went through war and Stalin and long lines, in Mr. B’s other grandmother’s case, starvation in the Ukraine. In addition to all of that, the Jewish women had being Jewish against them.

So when I finished reading the kaddish, I felt I had disappointed Mr. B’s grandma because if it were me, I knew I would be pissed off that some lame hipster-wannabe was butchering the Hebrew. I wouldn’t have known what a hipster was, but I would still be angry. And when I stood with my grandma, I felt that I had disappointed her because our generation of Russian women is soft, and we don’t cook, and we’re always at the mall. We don’t know their problems, and we deal with life  issues sometimes by complaining, or collapsing back on our parents for support.

Complaining about my hour-long commute or the fact that there are no embassies in Philly or that we can’t go to India this year or that I don’t have enough traction to apply to grad school  are not legitimate problems, but I don’t know how to steel up and be a real woman, yet. So I look to the women in my life who are older and smarter and fake it until I really learn how to make it.

But after the service, when everyone was drifting away, Mr. B’s grandpa tapped me on the shoulder from where he was sitting and said, “You did a good job. Thank you for reading. ”  and that’s all I needed to know.