New Orleans is amazingly beautiful for an American city and has an very distinct energy around Halloween. 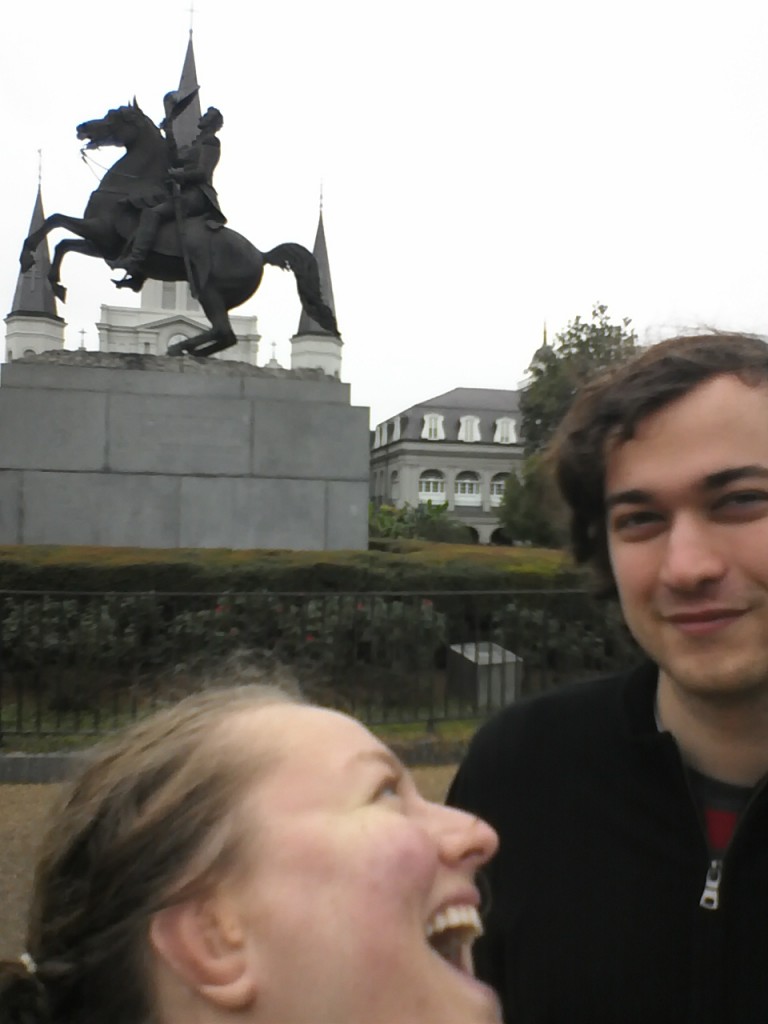 This is the post about how my dad called me at five in the morning on Sunday to tell me that the world is ending, every flight in and out of the Northeast is getting cancelled, and we are going to die in an airplane.

We’d known about Sandy before we left on Friday night, but at that time, there was no real way to assess whether the storm would impact Philadelphia. There was simply not enough information, even though I was reading Twitter, all of the major news sites, and listening to the radio.

There was just no way to tell whether Philly would be hit hard or experience rain storms. So Mr. B made the decision, because I am a terrible decision-maker. “We go,” he said, “and the worst case scenario is that we have a romantic drive through Mississippi, Alabama, and up the East Coast in a leisurely 20 hours.” But the rest of the weekend I didn’t think about Sandy too much because I was trying to do something super-hard for me: relax.

But by Saturday night, I was checking my Twitter feed with more regularity, convinced we’d have to make a decision to go/no-go on Sunday.  It is insanely hard to make decisions from casual observations on Twitter, as well, although by Saturday night it was slightly getting easier to aggregate information and assess the situation.

I also got some really good storm survival tips.

So on Saturday night, we decided we’d see what happened tomorrow.

What happened was that my dad called me to tell me that the East Coast wouldn’t be there when we got back and that they were canceling every flight in. Ten minutes later, my mom called me to appologize for my dad calling at five in the morning.  Five minutes later, I was wide wake and checking our flight on U.S. Airways.

This is the same message that was up on US Airways during the whole situation. No mention of any cancellations. No specifics. 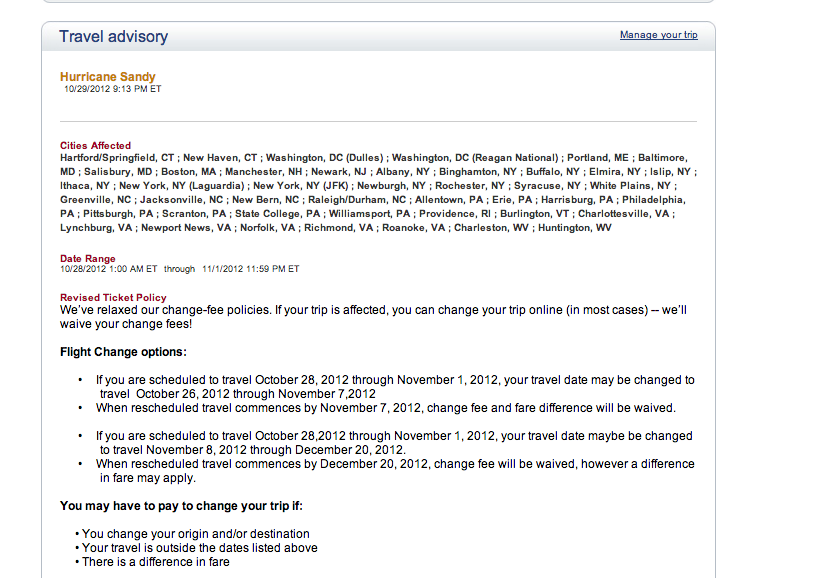 I called the number they gave.  Obviously, completely jammed. They wouldn’t even let me hold. Just hung up. Multiple times. Still insanely hard to make a judgment call.

“Screw it, we’ll make the decision later,” we decided, and  went off to the St. Louis Cemetery No. 1 tour.   After a couple hours of walking around New Orleans and me reading increasingly more horrifying tweets to Mr. B out loud, we decided it was time to put the process in motion.  We went back to our apartment. Mr. B got on the phone with US Airways. I turned on CNN and started looking for alternate flights on the iPad. I tweeted @ US Airways. No response.

“You can reroute your flight tomorrow, but it will cost you extra!” exclaimed the US Airways website. They did not say where the reroute would be to.  They also said that they were charging $150 more, when their Sandy page said they wouldn’t charge extra.  The phone line was still disconnecting Mr. B.

The problem with the American airline industry is that it sucks. Everyone knows that. But you don’t realize how bad it sucks until they are in an edge case.

“Let’s go to the airport,” Mr. B said. We packed everything. We were ready to fly out immediately, not knowing anything.

$40 from the French Quarter to Louis Armstrong International Airport, which currently looks just like Louis Armstrong’s voice sounded. An interrupted precious vacation day.  Two more phone calls from my mom and another one from my dad. “Where are you? Are you on a flight yet?  If not, you’re going to die.”

The mood was extremely sour.

But when we walked into the terminal and met Kirk, our luck changed. Kirk is magic man with a French Creole last name. He  works for US Airways in New Orleans and performed some exceedingly special voodoo for us to get us home.

We are so grateful to him that we would like to give him our first-born child, or at least a very serious raise and a vacation on an airline that is NOT US Airways. Kirk informed us that flights to Philadelphia, New York, and Boston had been cancelled since that morning.  “Yeah,  they sent us a memo this morning saying all the flights were cancelled, so all of the flights out today have been full of people on standby.” 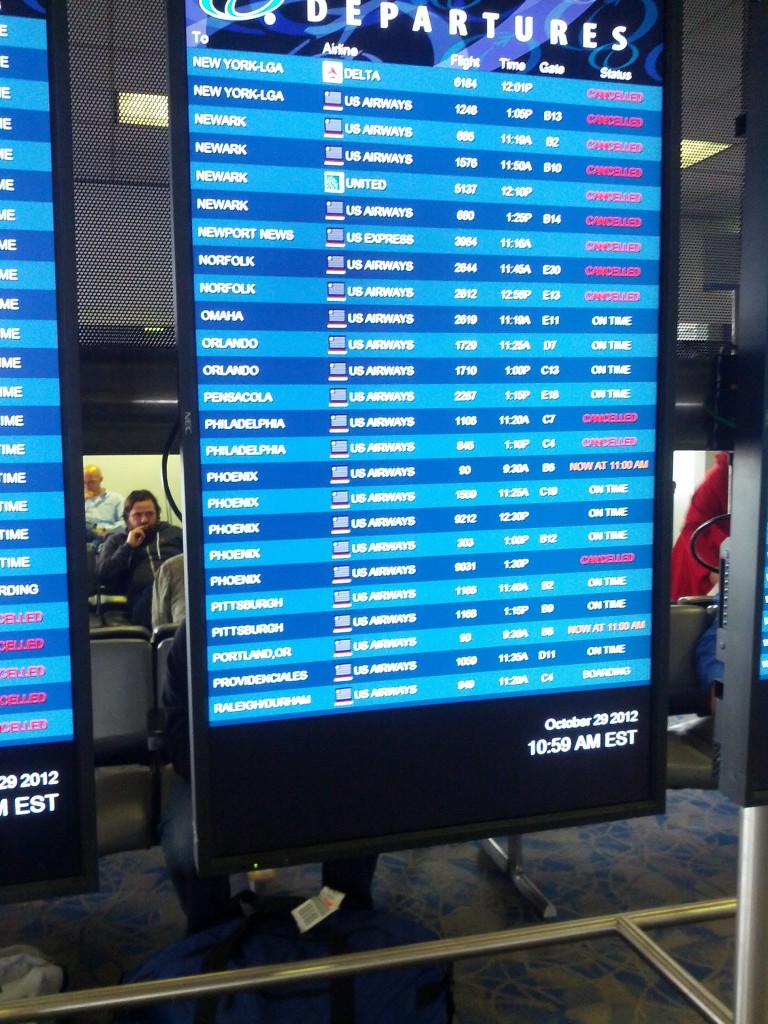 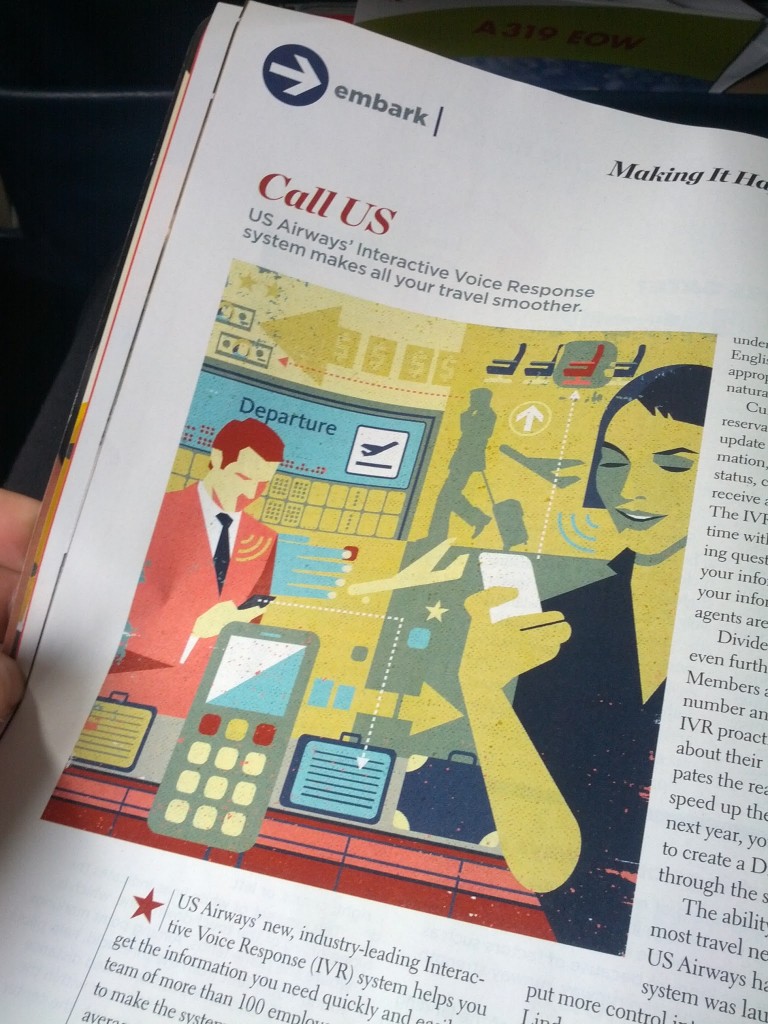 We scrambled. “No flights out tonight? How about to Cleveland?  We can drive from there?  Anything to Charlotte? We can do the eight hours, too.” There were no flights out because of the people trying to get out of New Orleans.

I braced myself for driving through Alabama.

“No,” Kirk said quietly, “but I am going to do my best to get you on a flight tomorrow from Charlotte to Pittsburgh.  Let’s see what we can do.” Kirk worked his magic voodoo fingers all over that 80s-era booking system keyboard. It was amazing to watch this man navigate the hellhole that is the US Airways reservation system, much in the same way I imagine Theseus navigated the Minotaur’s maze.

“Got it,” he said nonchalantly after twenty minutes. “You’re for sure on the 11:30 to Charlotte with a guaranteed connection to Pittsburgh, getting in at 4.  But I’ve also put you on standby  for a flight that leaves at 7 in the morning, also for Charlotte, with the same connection to Pittsburgh. You’re not sitting together during the second leg of the flight. Hope that’s ok with you.  If you make that one, you have a chance of getting into Pittsburgh around 2. I’d really recommend renting a car because other people might be doing the same thing.”

He neatly ripped off the six new tickets he created and helpfully labeled the standby ones for us.

“Take care and get home safely.”

I was ready to kneel at his feet.

From that moment, everything seemed to go uphill, somehow.

I don’t know whether it was the fact that Kirk really was a voodoo practitioner, or the fact that earlier we’d been at Voodoo Queen Marie Laveau’s grave, which has tons of positive energy, but the entire trip home was permeated with a kind of invincible efficiency. 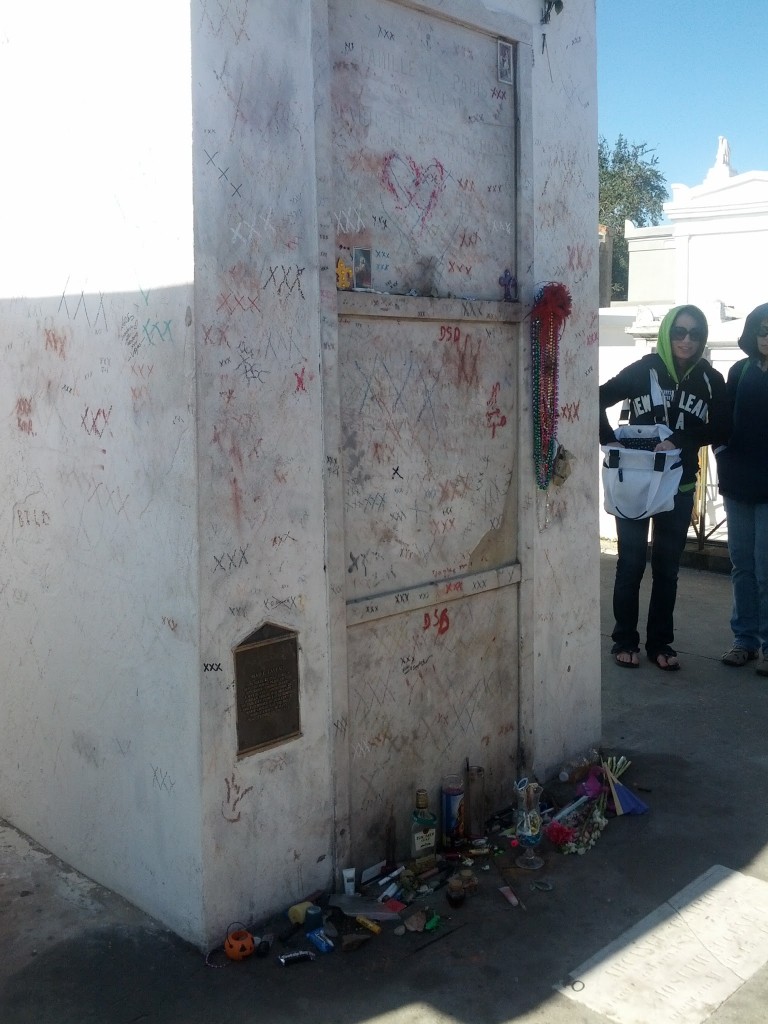 $40 cab back to the French Quarter, but we had an amazing dinner at Three Muses (which we stumbled upon by accident) where two French men played the accordion and the guitar live as we drank mimosas.  We walked around the nighttime city.

We got up at 5 in the morning.  Our taxi that we’d called the night before arrived exactly on time.  We got to the airport and decided to take our bag with us since we were on standby. I forgot that all of our toiletries were in the bag, right as we were going through security.  I braced for a body search and having our contact solution and cologne taken away.  Nope. Kept it.  We made it to the standby flight just as they were closing the doors.

“Boykis? We called you, but you didn’t answer.  We have room for you on standby.”

We flew to Charlotte, Lake Pontchartrain glistening without a hint of cloud while it was already gusting 30 MPH in Philly. “Looks like a smooth flight, folks,” the pilot grinned. 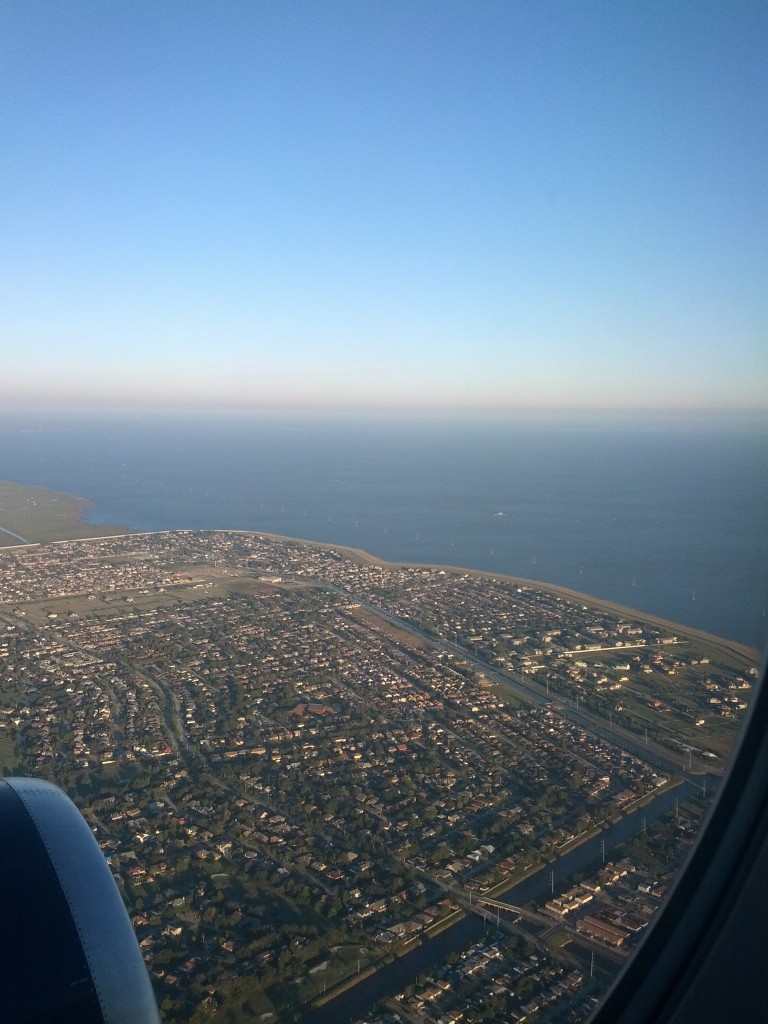 We immediately checked in at Charlotte. The flight to Pittsburgh looked very full. “I don’t think we’ll make it,” I said, bracing to be put on the later flight.  I was really scared we’d be driving at 9 at night, when the wind gusts were supposed to be 50 miles per hour and visibility was supposed to be low.  I didn’t think the voodoo would last.  But one by one the standby passengers were called and didn’t appear.

“Boykis?” the agent called and we ran up, tripping over each other to check in. We got our boarding passes. “Smooth ride to Pittsburgh,” the pilot announced.

It’s really dangerous for a Russian to be in a spate of good luck because they start thinking dark thoughts about how the spate will end.  But ours just kept going and going.

We got into Pittsburgh at 1 and our rental car was waiting. “I gave you guys 4-wheel drive,” Andrew, the extremely helpful guy behind the rental counter said. “Call me if you have problems returning it in Philadelphia.  I know if I was in your position I would want someone to take care of me.”

We got into the Captiva, which is essentially a tank, and hit the Turnpike.  We discovered about an hour into the drive that it had heated seats. I drove the first half which was pelting rain, and Mr. B drove the second half, which was darkness and wind. If it got really bad, we were going to stop at Harrisburg at my parents’ house, but somehow we felt enveloped still in the protective veil of Marie Laveau and Kirk the magic voodoo man, like we’d make it home alright.

And we did.  And our power never went out, and our tree is still in tact.

If it wasn’t for Kirk, we would probably still be in New Orleans, so a big thank you to Kirk at US Airways and Andrew at Avis, who were extremely nice to us in what could have been an amazingly annoying scenario. Marie Laveau was important. Pockets of extreme human kindness in the face of the most fucked-up industry in the world are just as incredible.